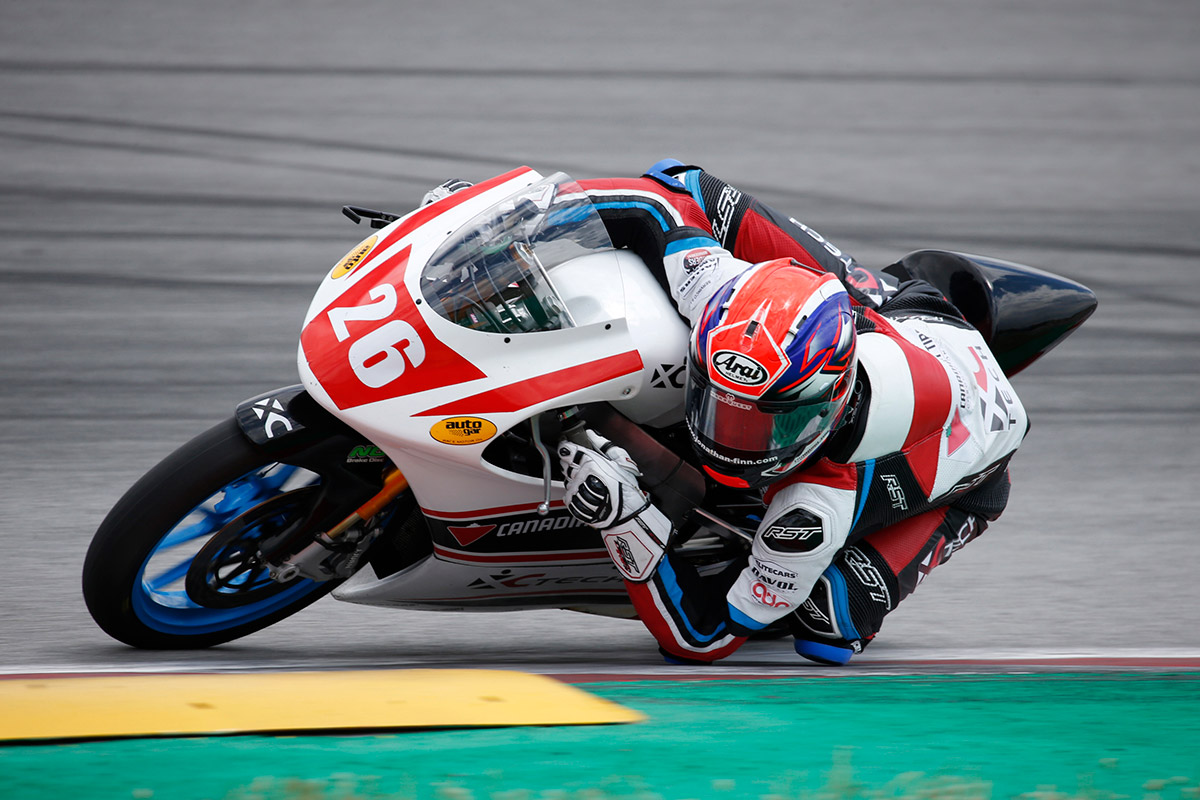 The 2019 ESBK Campeonato de España Cetelem de Superbike (ESBK) season concluded at Circuito de Jerez, which marks Jonathan Finn’s 10th year of racing and which will also will be his last year of racing. “I started riding motorcycles at the age of 5 and was turning laps and mini road racing throughout western Canada the following year at age 6. It’s been the only thing I’ve ever wanted to do” says the 16-year-old Moose Jaw, Saskatchewan native.

The decision to step back from competing amongst the world’s best riders was not an easy decision to make. “This has been my last season racing motorcycles at this level” says Finn. “I’ve been thinking about this decision the entire season. Racing motorcycles has been a significant part of my life for as long as I can remember. Making this decision has been the most difficult and emotional choice that I’ve ever had to make. Even though I do have the opportunity to continue my racing career here in Europe, the financial commitment required at this level along with the many sacrifices made by my family makes it very difficult to continue this journey. “

In his 10 years of racing throughout North America and Europe, Finn has amassed over 50 podium finishes and victories, as well as 4 CMA Canadian National championships. Finn has also been one of the very few North American’s rider competing in Europe and the only one racing the ESBK PreMoto3 series. This series is a direct stepping stone to the Junior World Championship and World Championship Moto3 classes where Finn has regularly earned top 10 finishes.

XCTech Team owner, Xavi Jiminez, has had the pleasure of working directly with Finn in the ESBK PreMoto3 series the last 3 years. “My experience working with Jonny, from when he first arrived in Spain as a small boy with very little experience compared to his competitors, has been a great pleasure” says Jiminez. “We have grown together, we have overcome very hard moments during this journey, but we did overcome them. Jonny has become a very fast, methodical and competitive rider. Most importantly, he has grown into an impressive young man of quality and professionalism. The whole XCTech team is left with the feeling that we say goodbye to Jonny who is more than just our friend. I wish Jonny and his family the very best! Thank you Jonny!!”

Jose Albors, Finn’s manager and owner of Riders Management, was the first to see the determination of a young Canadian who wanted to race in the Spanish Championship against the best riders in the world. “These last years that I’ve worked with Jonny and getting to know the Finn Family, it has been a great experience” says Albors. “When Jonny arrived in Spain, the level of competition Jonny faced pushed him to work hard and because of his determination he improve his skills and performance. This work ethic continued throughout the 3 years he has been racing here in Spain. Jonny has earned the respect of the entire ESBK paddock on the track and throughout the paddock.”

“Racing at this level is not only about the rider; it also includes the sacrifices and commitment made by family. The Finn family has been a pleasure to work with. Jonny has always had great support from his family and that is important at this level. I am super happy to have been this part of Jonny’s career.”

Other than Finn’s immediate family, there has only been one other person to have had an profound influence throughout his racing career. That person is long time family friend, Brian Ens. “I met Jonathan and his family during his first year of mini road racing back in 2010 and have been coaching him ever since” said Ens. “This past year, I moved to Spain and I have been living with and working everyday with Jonathan as coach, mentor and friend. It has been great to work so closely with Jonathan and to have helped him mature as a young man and rider throughout the past 10 years. All the best Junior!!!”

“I want to express how fortunate I feel to have had this experience and this opportunity in my life so far” says Finn. “I have achieved a level of skill and competition way higher than what I ever expected too. Although I did not reach the Junior Moto3 or World Championship Moto3, I feel proud to have been able to race alongside the best riders in the world these last 3 years and show that North American and especially Canadian riders can be competitive at this level. To achieve this level I could not have done it without my sponsors that have been with me since the beginning. Canadian Tire Cobourg (Moose Jaw), Arai Helmet Americas, John Bickle and Bickle Racing, as well as the many sponsors that have helped me along the way such as Lucas Oil, NGK Spark Plugs Canada, VNM Sport and MiniMob Racing just to name a few.”

“To all my friends, fans and followers on social media. Thank you for your likes, comments and support. Being far away from home it is great to know that I have that support base.”

“Lastly, I need to say thank you to my family. Without them believing in me, and their willingness to give up and sacrifice everything to afford me this opportunity is beyond expectation. Because of this I am truly thankful to my mom, dad and brother.”