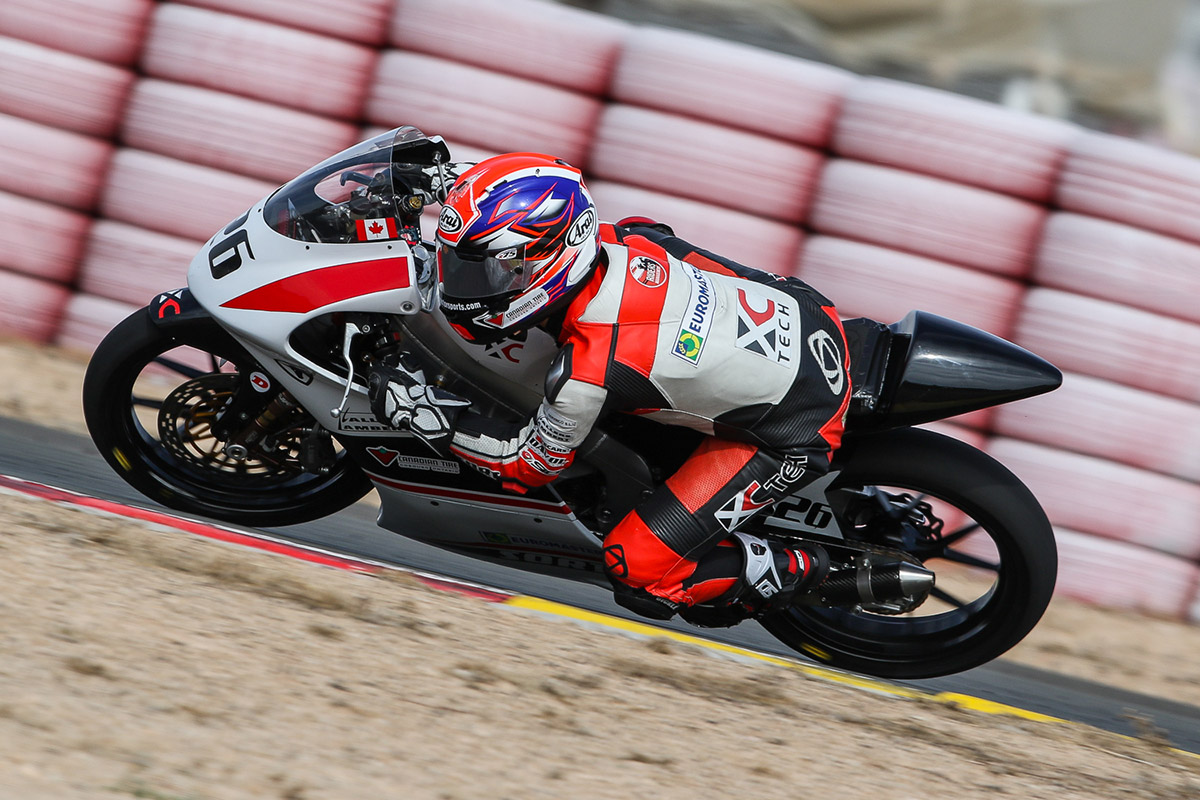 Circuito de Albacete was host to Round 7 in the Spanish RFME Campeonato de España de Velocidad (RFME CEV). Canadian teen Jonathan Finn was eager to join his XCTech team after a two-month summer break in the championship. With only two rounds remaining, Finn wanted to continue his pursuit for a top 10 finish in the series.

Circuito de Albacete is a 3.6km, 14-corner circuit that hosted the World Superbike Championship from 1992 through 1999. Finn is also familiar with this track having tested here on two separate occasions. “I am really happy to come back from the summer break and race here at Albacete. I enjoy this circuit and feel that I can really be competitive this weekend,” Finn said.

Practice sessions commenced Thursday morning and Finn was able to produce a personal best lap time during FP1. “It was great to see my lap times on my pit board coming down” said Finn. “I was able to start the weekend over 1 second faster than my personal best achieved when I had tested here.” However this trend would be short lived.

During the out lap of FP2 late Thursday morning, Finn was up to speed on the back half of the circuit. Coming out of corner 8 and transitioning into 9, Finn rapidly came up on a group of slower riders. While hard on the brakes attempting not to collide with the other riders, Finn proceeded through the gravel trap and made contact with the tire barrier. The last data recorded indicated that Finn was at a speed in excess of 110kph at the time of the incident. The session was red flagged and Finn was transported to the Circuito de Albacete Emergency Medical Centre by ambulance where he was examined and released under his own power. Finn suffered a badly bruised left knee and abrasions to his right neck.

After Finn’s incident in FP2, he attempted to ride during FP3 & FP4 later that day. “With the limited use of my left leg, the team and I were trying to make adjustments to my BeOn 85GP machine to help reduce the angle the my left leg had to bend. I needed to keep riding through my injuries and try to continue to get ready for the qualifying practice sessions on Saturday” said Finn.

Saturday’s qualifying practice sessions would be bittersweet for Finn as he showed good improvement with his injuries during the morning QP1 session, he would again achieve a personal best lap time while dealing with the pain in his left knee. The QP2 session later in the day did not produce the results he was hoping for. “About half way through QP2 I ran wide out of turn 11 and ended up in the gravel trap with a big tank slapper. I worked hard keeping the bike upright” which Finn did. However, he was unable to get the bike back out on track to finish the QP2 session.

Qualifying P15, Finn needed a good start and work toward the front. “I was able to get a solid launch off the line and immediately made up a few positions into turn 1. I got into a good rhythm running as high as P7 mid race.” In the later half of the race, Finn began having issues with his knee. “My knee really started to give me a lot of discomfort. I ended up in a 3-way battle for P7 but unfortunately could not hold off the two attackers.” Finn would consolidate for a 9th place finish in what would be his toughest weekend so far in the RFME CEV Championship this season.

Currently 12th in the Championship standings and only 3 points out of 10th place, a good result at the final round in Jerez would allow Finn to achieve his goal of a Top 10 overall in the series. “It was good to score another top ten finish here at Albacete, but I really need to push harder to get the results that I want,” said Finn. “Riding through the pain of an injury is something that I haven’t had to do before. But it is something that I have to learn how to push through”.

The RFME CEV series now travels to Circuito de Jerez south of Seville, Spain for the final round of the Spanish RFME Campeonato de España de Velocidad October 29, 2017. “It’s been a great opportunity for me to compete here in Spain this season. I’m looking forward to the last round of the championship later this month in Jerez and I am really determined on finishing inside the top ten in points this season” said Finn.