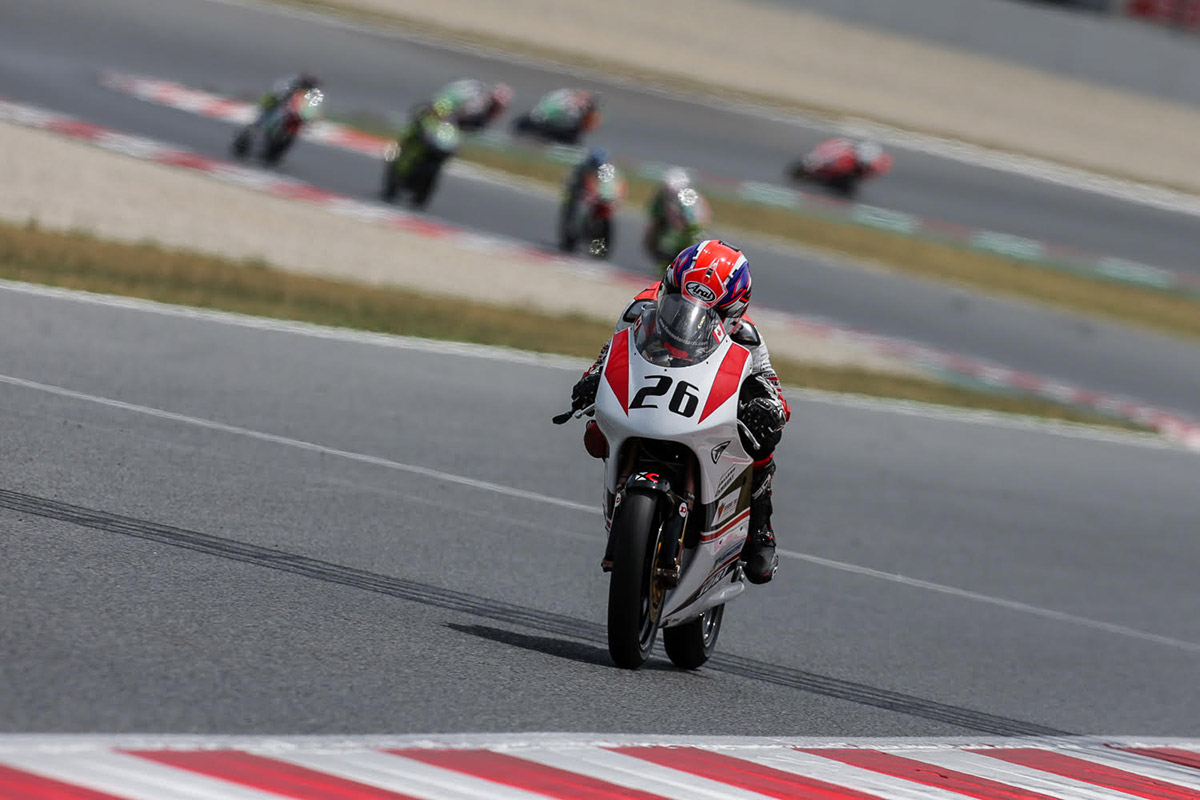 The Circuit d’Alcarràs in the Spanish province of Lleida was host to the only double header round for the GP85 Class in the Spanish RFME Campeonato de España de Velocidad National Championship. 13-year-old Canadian Jonathan Finn and the XCTech team were eager to put the technical misfortunes experienced at the previous two rounds behind them and focus on strong race presence during rounds 3 & 4 at Alcarràs.

With the threat of rain in the forecast for both qualifying and race day, Finn needed to make the most of his practice sessions to learn the 3.7km, 14-corner circuit. “The Alcarràs circuit has lots of elevations changes with off camber downhill corners that are really challenging,” said Finn. “With rain expected for qualifying practice and on race day I was glad that I had dry conditions to get comfortable with the layout before the rain came.”

With three practice sessions on Thursday and Friday each, Finn’s ability to adapt to another new circuit showed every session out as his lap times continued to drop. “Both practice days I was able to find time and improve every time out. I was really happy with my progress and knew I could go faster. I just needed to keep completing as many laps as I could,” said Finn.

Wet conditions during both of Saturday’s qualifying practice sessions would prove difficult for Finn to find confidence with the front of the bike. “I was really looking forward to running in the wet here in Spain, but during the qualifying sessions I couldn’t get enough feedback from the front of the bike. I wasn’t comfortable enough to really push hard for a good qualifying time. As the qualifying sessions continued, my frustration grew and I started to psych myself out. I really felt bad for the team and I knew I had to dig deep for good results in both races,” said Finn

Qualifying 31st overall on a combined grid, Finn would really need to get as much drive off the line as possible if there was any chance to push forward. Drying track conditions and a good start for Race 1 helped Finn regain some confidence. “I knew that for both races I really needed to get off the starting line strong. With the drying track conditions during the first race, I was able to get a solid launch off the line, push towards the front right away and getting into a good rhythm.” Finn would steadily make his way forward, gaining ground throughout the race finishing with a season best 8th position in the GP85 class. “It was awesome to score my first top ten finish here in Spain. The first race really helped me and I was able to carry that confidence into the second race.”

During the second race Finn did exactly that. With rain falling as the riders took their grid positions, Finn needed to find comfort in the wet on his BeOn GP85 and ride through the lack of front end feel. “I didn’t get off the line as strong as I did in the previous race but once I got going, I was able to set a good pace for myself and battle for position.” Finn would improve on his first race results with a 7th place in the second race of the GP85 class. “I am really happy for the team. My qualifying was terrible and I just wanted to prove to everyone that I could make a strong effort towards the front and earn another top ten,” said Finn.

Jonathan returns home to Canada until the RFME CEV series travels to the northern Navarre region of Spain to the Circuito de Navarra (25-26 June) just one hour south of Pamplona. Finn and the XCTech Team are excited to be carrying momentum into the Navarra round and look forward to seeing Jonathan continue to push towards the front.