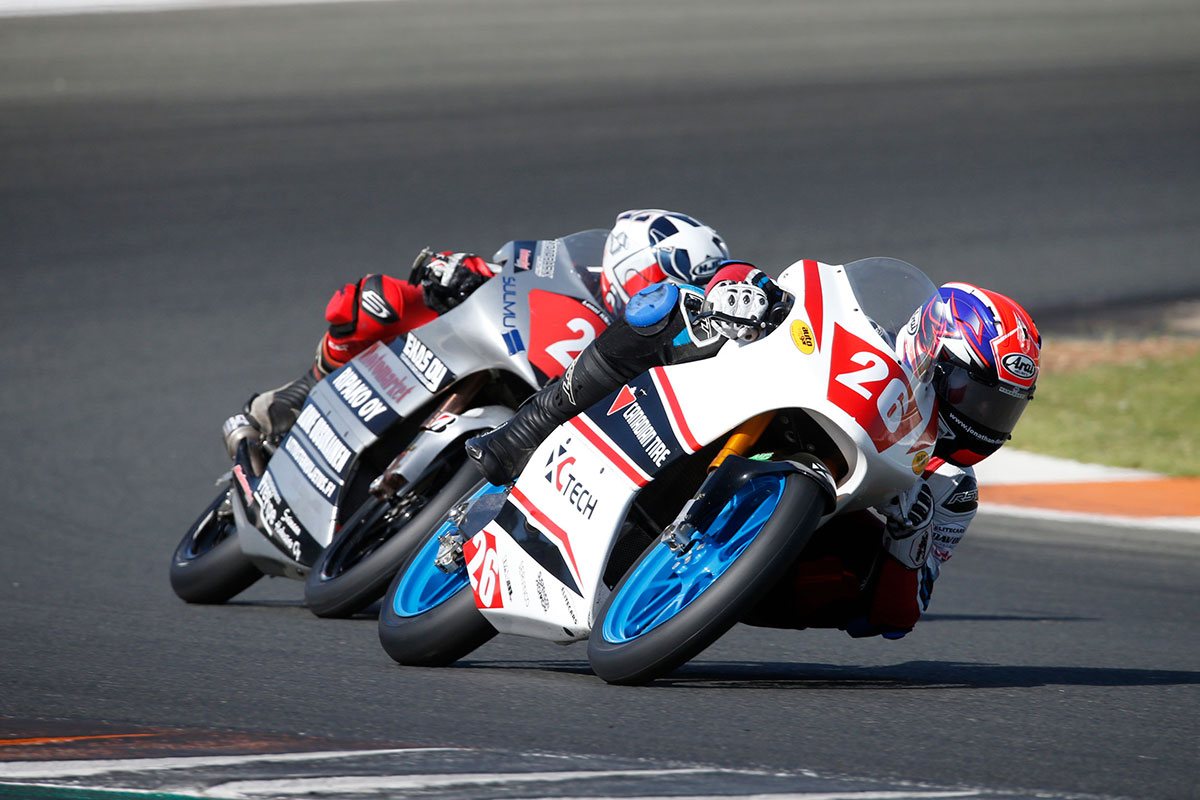 Canadian Jonathan Finn arrived at the Circuit Ricardo Tormo 5thoverall in the championship prepared to battle and continue his championship fight. Having made changes to his training program earlier in the season to help him better prepare for each race, Finn was able to demonstrate his true potential by earning a 5thplace and 7thplace finish aboard his #26 Canadian Tire – Cobourg, Team XCtech prepared machine.

Throughout the free practice (FP) sessions Thursday and Friday, the goal was to push hard into the 1:45’s. Jonathan continuously improved his times during each of the 6 FP sessions over the two days setting him up for what would be a great qualifying effort on Saturday. With temperatures reaching into the high 30’s, the biggest obstacle for the 2 qualifying practice (QP) sessions would be the heat. It was in the morning during QP1 where all the fast lap times were set and Finn was not different. Carrying the momentum of his FP sessions, Jonathan would qualify 4thoverall with a time of 1:45.547 just 8 tenths of pole and less then 2 tenths off the front row. Making it his best qualifying position since joining the Pre-Moto3 class last year.

Race 1 took place Saturday afternoon, after completing the two QP sessions, which would test all riders’ physical endurance as well as their ability to battle the high air temperatures. This did not affect Jonathan, as he was able to launch off the line and challenge for the lead going into the first corner. He was able to keep pace and stay with the lead group of 4 riders for the first half of the race. Having trouble using the draft to his advantage as well as coming under attach from behind, Jonathan was able to fend off and finish a personal best 5thplace in first race. “I knew I could challenge for the front,” said Finn. “This weekend has gone really well. Charging for the front and being able to have the pace to stay in the lead group is where I need to be.”

Determined to repeat the success of the previous day’s race for Race 2, Jonathan got off the line well again and was able to challenge for the lead right from the start once again. However, he was not able to keep touch with the lead group of 4 and found himself in a 3-way battle for 5thspot. “Sunday’s start was great, I had really good pace early on but again wasn’t able to stay with the leaders and had to battle for a top five but lost out in the draft. P7 isn’t bad but I wanted another top 5” said Jonathan. Sunday’s race and would earn another top-ten finish, bringing his number 26 Canadian Tire – Cobourg machine home in 7th.

“I’m happy with the how this weekend had gone. I always pushing to be better and the changes I’ve made to my training routine at the start of the season is starting to pay off. My training is going well right now and I just have to continue to work hard and arrive at each race prepared to do battle.” said Jonathan.

XCtech Team Owner, Xavi Jimenez added; “We’re very happy with the success Jonathan has had this weekend. We know that this is where he can consistently run and Jonathan has managed to stand out in Valencia this weekend right from the first day, positioning himself as one of the best in the PreMoto3 category. The ESBK Pre-Moto3 is a challenging series filled with a lot of talent all wanting to win. It takes a lot of hard work and sacrifice to compete at this level. We are in full support of Jonathan to help him keep improving and are looking forward to seeing Jonathan progress for the next race at Motorland Aragon.”

For more information about Jonathan Finn or if you would like to become involved as a sponsor please contact finnmotorsports@gmail.com